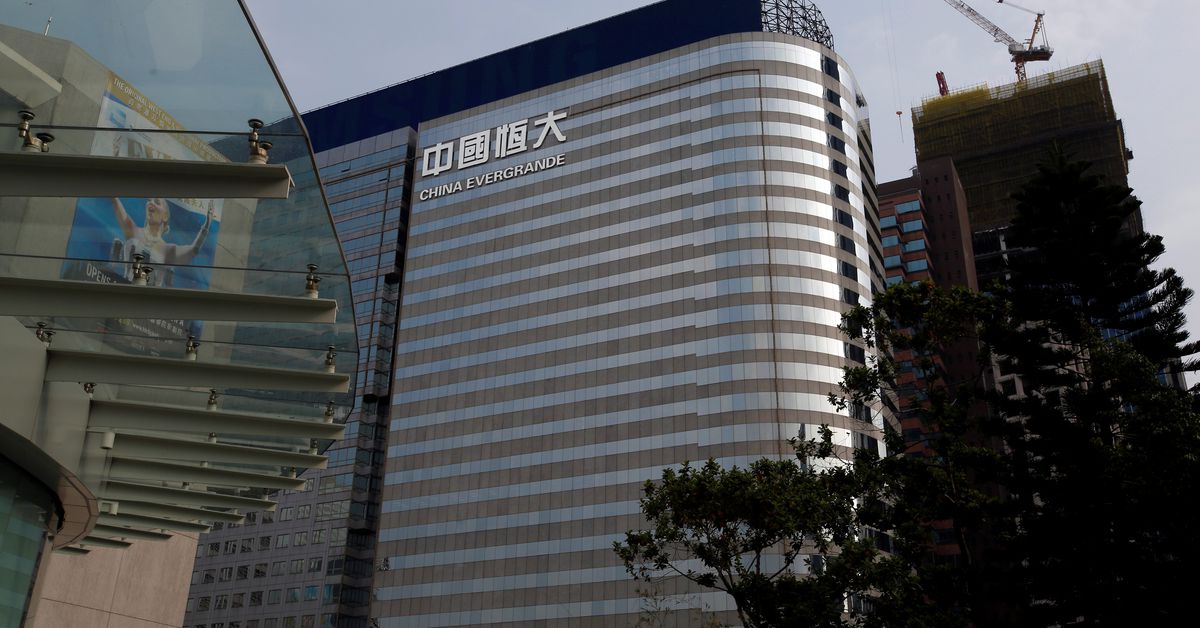 HONG KONG, Sept 14 (Reuters) – China’s most indebted property developer Evergrande Group (3333.HK) is struggling to solve its debt crisis, while there are increasing signs that policymakers are stepping in to avoid a hard landing for a company deemed too big to fail. read more

Here is a timeline of events leading to its debt problems and what the firm has done to raise funds so far:

The central bank names Evergrande in a report as one of the few financial holding conglomerates on its watch that it says could cause systemic risk.

Evergrande sells 28% of its property management unit for $3 billion in a pre-IPO deal.

It pledges in a letter to the Guangdong provincial government to approve a Shenzhen backdoor listing plan that has languished for four years, warning it would face a cash crunch that could lead to systemic risks.

Company offers 30% discount on properties for a month to push sales.

It raises $555 million in a slimmed-down secondary share sale in Hong Kong.

It terminates the Shenzhen backdoor listing plan and strikes an agreement with some strategic investors not to demand repayment.

Evergrande sells 10% of its online real estate and automobile marketplace Fangchebao to 17 investors for $2.10 billion in a pre-IPO deal.

It targets to meet all three caps on debt ratios by the end of 2022, and lays out plan to list Fangchebao by early next year, and spin off other units including spring water and tourism.

Fitch downgrades Evergrande to ‘B’ from ‘B+’ with a negative outlook.

The developer arranges HK$13.6 billion ($1.75 billion) to repay a maturing bond and interest on all other dollar bonds, and it says it will have no further bonds due before next March.

Evergrande achieves one of the debt ratio caps set by regulators, by cutting its interest-bearing indebtedness to around 570 billion yuan, from 716.5 billion yuan six months ago.

A court orders a freeze on a 132 million yuan bank deposit held by Evergrande at the request of China Guangfa Bank Co (GDDVB.UL). Evergrande says the loan is not due until next March and it plans to take legal action.

Some banks in Hong Kong decline to extend new loans to buyers of two of Evergrande’s uncompleted residential projects.

Evergrande scraps a special dividend proposal. S&P cuts its ratings on the company by two notches to B- from B+ with a negative outlook.

Fitch downgrades Evergrande to “CCC+” from “B”.

Evergrande agrees to sell stakes in its internet unit HengTen Networks Group Ltd (0136.HK) worth a total of HK$3.25 billion.

Legal sources say lawsuits against Evergrande across the country will be centrally handled by the Guangzhou Intermediate People’s Court.

S&P downgrades Evergrande again by two notches to “CCC” from “B-“.

The company says it is in talks to sell certain assets, included stakes in Evergrande New Energy Vehicle and Evergrande Property Services.

State media reports construction work has been halted on two Evergrande projects in Kunming, one of them for overdue payments and the other was scheduled to deliver to homebuyers in October.

Hui Ka Yan steps down as chairman of flagship unit Hengda Real Estate Group which Evergrande says is due to the termination of the backdoor listing plan.

Evergrande pledges to do everything it can to resolve its debt issues, and it will work to maintain the stability of the real estate market.

Evergrande warns of liquidity and default risks if it fails to resume construction, dispose of more assets and renew loans, as it reports a 29% yoy decline in net profit including non-controlling interests to 10.5 billion yuan.

Chairman Hui Ka Yan, along with the heads of eight task forces set up to guarantee home deliveries, lead a pledge-signing ceremony to promise buyers it will complete construction of their homes.

China Chengxin International Credit Rating Co (CCXI) downgrades Evergrande and its onshore bonds to “AA” from “AAA”, erasing the bonds’ value for use in pledged repo trading as a result.

Moody’s downgrades the corporate family rating (CFR) of China Evergrande to “Ca” from “Caa1”, with a negative outlook.

Media report that Evergrande will suspend interest payments due on loans to two banks later in September, as well as payments to its wealth management products.

Chairman Hui vows in a forum to repay all of its matured wealth management products as soon as possible.

Some videos circulating on Chinese social media show what are described as Evergrande-related protests elsewhere in China.

Evergrande says online speculation about its bankruptcy and restructuring was “totally untrue”, but adding it was facing “unprecedented difficulties”.

Evergrande says it has engaged financial advisers to examine its financial options and warned of cross-default risks amid plunging property sales.

Comfort is number one