In 2017, the City of San Antonio chose Zachry Corp. out of 11 bidders to construct buildings on the northwest corner of Hemisfair, around a new public park named Civic Park. When Zachry unveiled its design a year later, for a hotel, an office tower and a food market, it said it hoped to finish construction in early 2021 — or, right around now.

Yet the site, a grassy lot next to the Henry B. Gonzalez Convention Center, surrounded by chain-link fences, has remained undeveloped for the last four years.

That could soon change, as the nonprofit that manages Hemisfair prepares to begin construction of the first phase of Civic Park, a nine-acre park with an expansive lawn, a promenade, water fountains and other features that its planners hope will match the success of Yanaguana Garden on Hemisfair’s southern side.

The nonprofit, the Hemisfair Park Area Redevelopment Corp., or HPARC, will soon solicit bids from contractors after briefing the City Council at an upcoming meeting, and hopes to start work in the fall, said Andres Andujar, its CEO.

There is little hope of Zachry breaking ground soon on the buildings that will enclose the park, though. The company, led by chairman and CEO David Zachry, is in talks with HPARC and the city to change its $200 million proposal, enshrined in a lease agreement approved by City Council in 2017, because it is unclear whether it is still feasible after the pandemic has wracked the real estate and financial markets, Andujar said. Zachry is now considering changing the mix of uses in the development, or scaling it back, he said.

“We will see that in the next few months,” he said. “It’s not necessarily the case that they will scale back. But if we reduce the retail footprint, is there another use that could go on the ground plain that activates the park in a similar way that we’ve envisioned? We’ll see.”

Zachry’s proposed design, which it drew up in 2018 with local architecture firm Overland Partners, called for a 14-story hotel, an eight-story office building, a food hall, and an apartment tower built in partnership with another developer, all sitting atop an 825-space underground parking garage. It would have included 70,000 square feet of retail space and between 120,000 and 150,000 square feet of offices.

The latest setback has been the pandemic, which has undermined the retail, office and hotel industries, making it nearly impossible to raise financing for a hotel now, Andujar said. The impact on those industries has spread to other aspects of the development, he said: If a planned apartment tower was going to have retail on its ground floor, the whole tower might now be unfeasible if the retail portion will no longer work.

HPARC is open to changing the mix of uses in Zachry’s development as long as it brings as many people to Civic Park and creates as much economic activity as the previous design, Andujar said.

“If office space becomes very challenging to finance, and to find tenants for, and we change that, let’s say to residential … we don’t think that’s necessarily bad. In fact, it may be good,” he said. “We are maintaining the flexibility, within the value of the original proposal.”

He declined to call the discussions a “renegotiation.” There might be an amendment to the 2017 agreement, but there likely will not be a new contract, he said.

“We have no question about the ability of Zachry to deliver on their promises,” Andujar said. “We just need to work through what it means to adjust to the new realities of feasibilities, demands and financing.”

Spokespersons for Zachry Corp. and the city declined to comment.

‘The beauty of what’s coming’

The advantage of starting construction on Civic Park is that it is something that HPARC can control after the pandemic has turned everything topsy-turvy, Andujar said. The first phase is fully-funded, with an estimated budget of $27 million. It’s unclear when construction of the second phase will begin, he said; it depends on when HPARC can gather the funding.

“We’re still working on that,” he said. “What’s critical is that we kick off phase 1 and we start to deliver on that public space. I think that’s actually going to help on getting clarity for phase 2 funding and timing.”

Civic Park has long been imagined as a wide-ranging park with courtyards, lawns, gardens and clusters of trees, open day and night and hosting public events large and small, from concerts to kickball games. The first phase will be accessible to pedestrians from the River Walk, the Convention Center, South Alamo Street and Yanaguana Garden, a children’s park. Yanaguana was the first segment of Hemisfair to open, in 2015, and has proved popular with locals and tourists alike. Last year, it was a finalist in the Urban Land Institute’s Open Space Awards.

The Zachry family has been involved with Hemisfair since the beginning, with HemisFair ’68, the World’s Fair. David Zachry’s grandfather, H.B. “Pat” Zachry, played a key role in raising support for the fair and built the Hilton Palacio del Rio to house its guests. David Zachry served on HPARC’s board from its creation in 2009 until 2011.

David Zachry later lobbied state legislators to weaken limits on hotel construction at Hemisfair. At the time, there was opposition to the idea of putting hotels on the site, out of a concern that tourists would come to dominate the park.

In February 2017, city council approved an agreement to lease 5.5 acres at Hemisfair’s northwest corner to Zachry Hospitality, a Zachry Corp. subsidiary, for up to 97 years. The agreement spelled out that Zachry would pay HPARC about $1.5 million a year and a portion of the revenue from its retail establishments.

Then, as HPARC and Zachry went forward with the proposal, it became clear that the plan to create a large amount of underground public parking would be difficult to build and finance.

The problem of how to build the necessary parking for Hemisfair has yet to be resolved, Andujar said.

“We may need to abandon those ideas,” he said. “I don’t think it’s going to be below-grade. Maybe a small piece of it could be basement-level, but what I’ve learned over the last couple of years is that below-grade parking, at this particular location, next to the river and the water table and various other impacts of digging holes in the Hemisfair area, that we’re not going to go very far in the ground.”

He emphasized that any above-ground parking will be built tastefully, with murals or walls of foliage to improve the aesthetics. 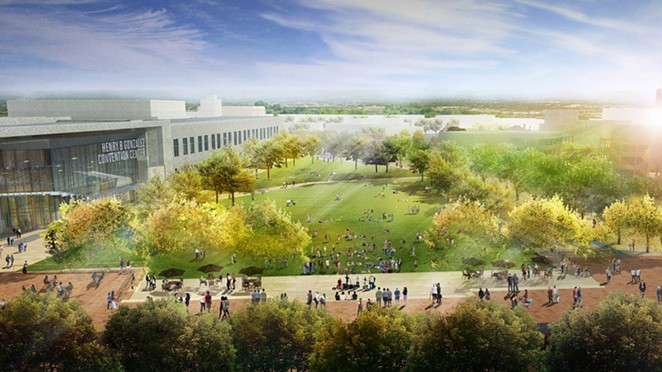 Beyond the problem of parking, one of the primary reasons for the project’s delay is its complexity, said Omar Gonzalez, HPARC’s director of real estate.

“Design evolves over time. The more you think about something, the more it changes,” he said. “I wish it was that easy to say, ‘Here’s the one factor why it’s delayed,’ but the truth is, it’s just really complicated. You’ve got a number of different partners, a number of different types of commercial real estate development, different design teams that are coordinating, you have utilities, and how do you work with CPS (Energy) and SAWS, and how do you coordinate between a park and a (public-private partnership).”

He added, “At the beginning, we just may not have fully understood that complication results in delay, so we may have been aggressive in a lot of our early schedules.”

NRP Group, one of San Antonio’s most active developers of multifamily housing, signed on at first to build a 380-unit apartment building as part of Zachry’s big-picture project. But NRP’s style of constructing mid-rise apartment buildings “got really tested” in a location that demanded more density, Andujar said.

Debra Guerrero, NRP’s senior vice president of strategic partnerships and government relations, agreed with his account. Zachry and HPARC envisioned the apartment building as a high-rise steel structure, and “rents to support that higher construction cost and operation are challenging to achieve,” she said in a text message.

NRP proposed a non-steel structure that would work financially, “but it did not meet Zachry or Hemisfair’s vision for the overall development, so we stepped aside,” she said.

Downtown developer David Adelman — who finished construction of The ’68, Hemisfair’s first apartment building, in 2019 — said he is negotiating with Zachry to build the residential component. He is working with officials at Zachry to consider their options, he said.

Ever since the 1968 World’s Fair ended, local leaders have had trouble figuring out what to do with Hemisfair, how to make it work. The current effort, begun in 2009 when city council created HPARC, has benefited from the recent surge in development seen all over downtown. The Covid-19 pandemic has dampened that momentum, yet the Civic Park site remains one of the most desirable in downtown, next to the Convention Center and the River Walk and not far from the Alamo and the West Houston Street tech corridor.

“We don’t know exactly how this will pan out, but what is unchanging is that we have one of the most fabulous corners in the United States for a development of this sort,” Andujar said. “The ground value is not changing very much. It’s just the feasibility of delivering, at this time, a certain mix. That’s what we’re trying to work through: What’s the right mix?”

Richard Webner is a freelance journalist covering Austin and San Antonio, and a former San Antonio Express-News business reporter. Follow him at @RWebner on Twitter.

The San Antonio Heron is a nonprofit news organization dedicated to informing its readers about the changes to downtown and the surrounding communities.

Stay on top of San Antonio news and views. Sign up for our Weekly Headlines Newsletter.