Playhouse developers have five months to get permit – Featured 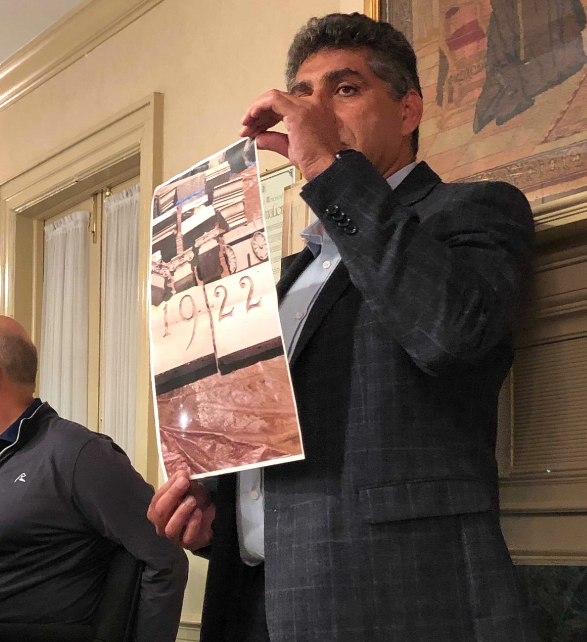 The Village of Great Neck Estates trustees granted the developers of the First Playhouse project 90 days to file the necessary paperwork to obtain a building permit and an additional 60 days afterward to obtain the permit.

An apartment complex is planned for the site of the historic playhouse that dated back to the 1920s.

The measure, which was unanimously approved by the town’s Board of Trustees, was an amendment to an existing incentive zoning permit for the project that recently completed demolition on the building. Village Building Department Inspector Barbara Dziorney said the First Playhouse group will be required to submit all of the additional paperwork, which includes engineering, plumbing, electrical, structural, and mechanical plans, all at once.

Paul Bloom, of Harras, Bloom and Archer LLP, who serves as legal counsel to the Playhouse group, said the demolition “went well” and said the developer and the property owner, Jan Soleimani, will submit the necessary paperwork to move forward with the project within the 90-day period.

Village officials questioned the developers about why the various other forms and paperwork weren’t ready to be submitted once the demolition work was done. Bloom said the unfortunate pairing of the re-evaluation of the project and the coronavirus pandemic resulted in the group not having all the paperwork ready to be immediately submitted.

Albert Shirian of Lions Group NYC said he anticipates the construction would take anywhere from 24-36 months, with the winter weather being a determining factor on how quickly the project could start and taking into account any other delays after construction begins. The 150 days, or roughly five months, to obtain the permit would result in the developers being able to start construction in mid-December.

“If we’re not getting 20-degree weather and two feet of snow, we can start construction in December,” Shirian said. “If the weather permits, we can start as soon as we get a permit. But we do not gain anything by delaying the construction.”

The board ultimately granted the developer a total of 27 months to construct the building from the time the permit is obtained. Village Attorney A. Thomas Levin said if the group does not adhere to or fails to meet the deadlines to file or obtain the permit, approvals previously awarded by the board will be rescinded.

In April, the board awarded the Playhouse representatives and Lions Group NYC an additional 30 days to finish the demolition of the existing structure to develop a five-story, 20-unit, 35-bedroom mixed-use apartment complex. The plans to have a mixed-use building that includes a floor of retail have been presented to the board for years.

Carol Frank, who represents the Great Neck Historical Society, wrote a letter to village officials imploring the group to finance a plaque that describes the former building’s history and impact on the Great Neck community.

“This would help preserve something very special and historic in the Great Neck community,” Frank said during the meeting.

In its heyday, the First Playhouse on Middle Neck Road showcased Broadway-bound plays and vaudeville acts starting in the mid-1920s, including the works of Marx Brothers and F. Scott Fitzgerald. United Artists bought the theater in the 1930s, but it closed in 1983.

The developer agreed to pay for a plaque that will presumably be located on the first floor of the future building along with incorporating two stones from the previous building with “1922” inscribed on them, the year the building was constructed.

“It’s been a long and winding road,” Mayor William Warner said. “I won’t say that things haven’t gotten lost in the process…we are where we are now and we’re not looking back and throwing stones, so I think the requests by the historical society are very fair.”

Frank said the historical society would assume the task of drafting the language that will be featured on the plaque.

The premier source for general